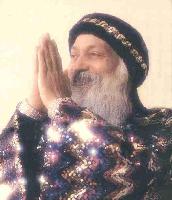 Your name: Swami Anahata. Anahata is one of the most significant words. Literally it means unstruck sound.

The mystics have found - and it is one of the ancientmost discoveries, at least ten thousand years old - that life, that the whole of existence, is made of sound, of subtle vibrations of sound.

Modern physics discovered it too from a very different route; because of their different routes their definitions are a little different. But anybody who has some perception, who can think in both ways - scientifically and mystically - can see the unity, can see that they are talking about the same thing in different languages, different jargon.

The mystics discovered sound first, hence they define electricity by sound. In the East there has been a certain melody called "Deepak Rag", light melody. It is said that there have been singers... and it seems to be an almost historical fact, not just a mythology, because there are so many records about it and very recent records - five hundred years old.

The mystics and the physicists have travelled towards the same destination from different angles.

The mystics have also experienced - and I can vouch for them, I can be a witness for them that they are saying something really significant - that there is a way in which you can resonate with the whole existence in the same tune. That's meditation; resonating with the whole universe without any disturbance, falling in step with the melody of the whole. Then your ego disappears, then you are no more there. Then there is only music - that music is Anahat, and to experience it is to know what bliss is.